Another Ribfest in the Books...

As the summer of 2009 continues to fly by, this past weekend marked the 5th anniversary of the Kuamoo Ribfest. This years invitation highlighted some of the many people who have attended past events. This years family vacation (see blog entry AN-TIS-A-PA-TION - Headed West), pushed the date of the Ribfest back a few week further than usual. Unfortunately this resulted in quite a few regulars not be able to attend. We also missed our party pals, Chris and Wendy, who moved to Phoenix earlier in the year. Although our crowd was smaller it was still a fun event and a beautiful evening to sit by a fire. 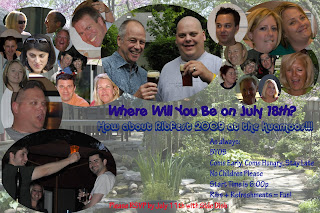 When preparing for the party there are always a lot of detail to take care of. Aside from a couple of days of cleaning, Misty and I work hard to make sure that everything is in order.
There 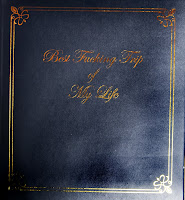 's the entertainment, which revolved around the photo album containing my blog entries for my Motorcycle Trip to Utah. I also displayed many of my photos on our TV which was a great media for a picture book. It also gave me a ch

ance to use the built-in USB feature on the TV. Displaying the pictures in using this feature was a snap.
Next, although it's technically a BYOB party, we are fortunate to have quite a few friends that are excellent brew masters and are willing to share their craft at our party. This years brew was provided by our friend Paul,

who served an excellent IPA. 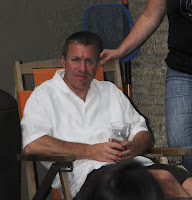 Paul came over earlier in the day to setup so that everything would be in order for the party. A cooler, some ice, a little CO2 and we were ready for the test. Aaaah, Pauls IPA was an excellent addition for the party and was enjoyed by many throughout the evening (as well as the next day in my case).
Then there's the fire, an ever so important part of any of our outdoor parties. I like to start the fire before the crowd arrives so that the smoke is minimal by the

time we're ready to sit down and relax. Normally, in July, our evening temperature would be in the mid to upper 70's, however this year it's been much cooler and will likely be in the low 60s by nightfall. More wood and beverages was the easy answer to the unseasonably cool temperatures. It was a perfect night...
Last but not least, there is the food. As the parties namesake indicates, ribs were the main fare. The ribs were supplied by my

s Square Shopping Center. I like Smackies rib quality and you can't beat their "buck a bone" Saturday deal.
Accompanying the ribs were many tasty dishes supplied by our guests. No one walked away hungry that night...

We had lots of great guests this year. Unfortunately I wasn't able to photograph everyone. Many were families that Misty and I had the pleasure to get to know while coaching past youth hockey teams. Hockey parents often form a tight nit group over the years as we continually see each other in some rink somewhere. This particular group we've known for more than my two

years of coaching (inside joke). Misty and I cherish the bonds that we have formed as hockey parents but most of all we've enjoyed the opportunity to coach their boys.
We were happy that Shelly, a good friend and last years team manager, could join us so that we

could celebrate her birthday. We attempted to surprise her, although it's hard to sneak 20+ people into the kitchen without her noticing. But we sang her Happy Birthday then Shelly blew out the candle on her cupcake from Pink Moon, a

favorite local cupcake shop.
The party continued with lots of stories and laughter. Mike and Sandy posed for a picture but Mike was caught here holding an empty beer glass. I think that's a major party foul.
It also looks as if Misty and Mike are having an entertaining conversation that Tom and Mark are enjoying. Perhaps Christine and Sandy are also finding it humorous.

A party at the Kuamoo's wouldn't be right without Misty's famous Cosmos. Her use of pineapple infused vodka with PAMA liqueur has always been a crowd pleaser, but this year she added a

little twist by placing a bourbon soaked cherry in the bottom of the glass. The cherry subtly complemented the normal sweetness of the drink, making an already great drink, even better. For those brave enough to eat the cherry, the cool night got a little warmer. After a few of these crimson concoctions it looks like my camera got a little out of focus.
As the night wound down Mark did an excellent job tending the fire, just perfect for an "adult s'more"(the secret is the dark chocolate) and the perfect way to end a great night of food, beverage and friendship. Thanks to all who were able to make it this year. 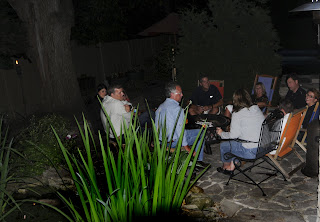 Next year we'll do it all again. For all you brew masters, this is your first notice to prepare your best brew as we will be featuring our first brew-off. But before you get too focused on next year don't forget to stop by before the Dublin IrishFest in two weeks. That always a party to remember.

See you next time!
Posted by JKShutterbug at 5:13 PM