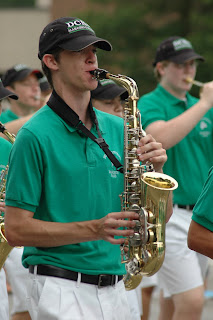 The Fourth of July is a holiday that most Americans celebrate for various reasons. The festivity may involve family, friends or public gatherings. Popular culture would have you believe that the gala is a birthday party for the country. Flags wave, bands march and bystanders cheer. The parades are pageants, visible spectacles for all to applaud and enjoy. Although the original intent of the day was to celebrate our countries Declaration of Independence, I think it's now widely accepted as a great excuse to PARTY!

The day started early with the neighborhood parade. It was a wonderful time to get away from the everyday stresses that life can bring and enjoy the entertainment of clowns, floats and neighborhood bands.

Whether painted on smiles, reluctant smiles, or uncontrollable smiles, there were certainly lots of smiles and that's one thing that makes this day so very special. Although this day is full of magic and enchantment, let us not forget 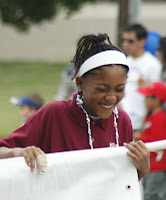 to thank our veterans who have served our country in the armed forces, our active duty soldiers that continue to serve, and those who have made the 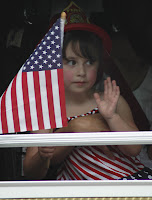 ultimate sacrifice so that we may enjoy the many freedoms that we have today. One such soldier is L. CPL Wesley Davis, the son of a local business associate of my wife's. Wesley lost his life in Iraq while in combat with the Lima Company; part of the U.S. Marines. My family and I are forever indebted to Wesley and the many others who have fought and died for our country.
God bless you all! 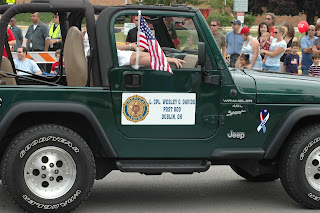 As the parade dispersed, the next event on the agenda is the annual Frisbee Dog Competition. There were many fans watching this fun event, including other dogs. Perhaps these were dogs in training, spying on the competition for next years event, or maybe they just enjoy watching the other dogs at work.
The

competition was made up of many breeds with just as many attitudes. This playful pooch, a black

Border Collie would taunt the crowd each time he made a catch. As you can see he also loved the camera as he would make sure to stare right into the lens with each pass.
The German Shepard breed was well represented this year. Their 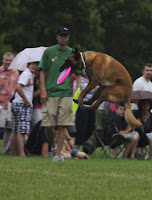 as impressive as they leaped high into the air to snag each disk. Also impressive was their ability to travel long distances in pursuit of their prize.

There were many more dog breeds that rallied a cheer from the crowd. Although these dogs were running lap after lap, chasing a plastic disc, it was obvious that the dogs were having the time of their lives showing off for their masters as well as the crowd.
It was no surprise that the winner of this years competition was an Australian Shepard. This breed of

natural herders is built for running and certainly has endless energy, but there was no doubt 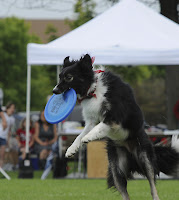 that the crowd favorite was a dog named Rockets Red Glare (Hmmm, sounds like a stage name to me). Rocket is a Boston Terrier; you heard right, a Boston Terrier! Who would have thought that a Boston Terrier could compete with the "big dogs" in a Frisbee competition. However this dog was amazing, running as far as the German Shepards, short legs but a blur and eyes a bulging. This small dog with a big heart stood with the best of them and raised many a cheer from the crowd. GO ROCKET!!! 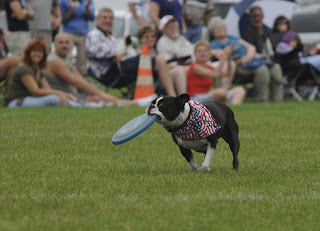 As the day was coming to an end, my wife and I headed over to Coffman 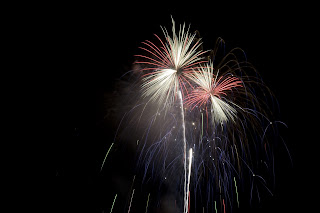 High School to watch the fireworks. We strategically picked a great vantage point, unfolded our chairs, cracked open a bottle of vino and listened to the music of Boyz II Men and The Four Tops while we waited for nightfall. A drizzle continued to fall which concerned me from the photographic perspective, but as luck would have it, as soon as the fireworks started, the rain ended. A slight wind, moving away from our position made it a perfect night for photographing fireworks. For you photo-techies, the following pictures were shot with a Nikon D 300 at an exposure of F16 for 6 to 8 seconds.
These setting worked well to show a 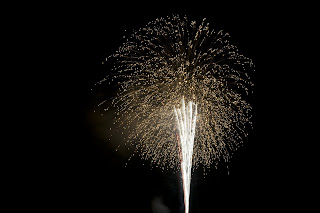 moderate amount of spread without too much over exposure.
All in all it was a great day for family and friends. I hope your July 4th was as enjoyable as ours. If you've had a July 4th experience that you would like to share, shoot me a comment.
Happy 4th and see you next time for The Kuamoo RibFest. 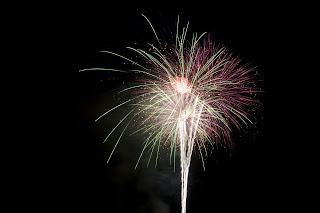 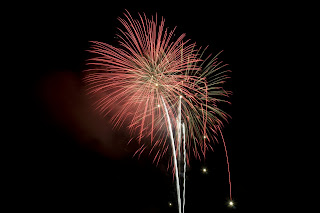 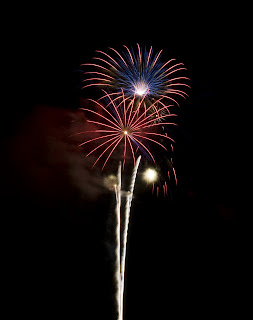 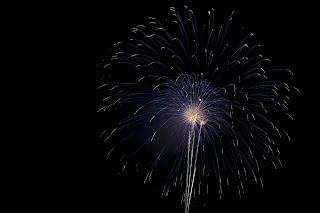 Posted by JKShutterbug at 7:00 PM