After a long cold winter it's finally starting to feel like spring, and for me it's time to start shooting sports. Right now it's 8th grade lacrosse which is an interesting game with lots of action and lots of good shots. 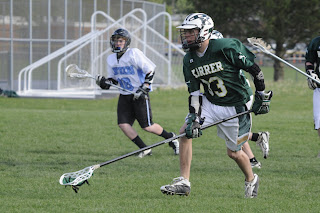 This is my son Caleb in the green #33.
For those of you not familiar with lacrosse, he plays a position called 'long-pole defense', or pole for short.
His experience in hockey has helped him progress very well in lacrosse, not to mention he plays a physical game which is another transfer from hockey.
Shooting lacrosse in Ohio is always interesting because of the changing conditions throughout the season, not to mention throughout the game itself. During a single game you may see bright sun at low angles, overcast, rain and yes even snow. As a photographer I've learned to dress for the conditions (maybe even overdress). 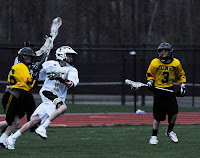 Aside from the weather, another challenge is that the games start at 6:00p and end around 8:00p. Well with spring in Ohio, it starts getting dark around 7:30p. So good shot are harder to compose as the evening grows later.
Over the course of the next few weeks I'll discuss in more detail some of the challenges of shooting outdoor sports in the East. I'll share with you some good shots as well as some bad ones. But most of all I'll share with you some of the techniques that I use to capture the action, without

having to take a second mortgage on your home or sell your hierlooms.
Capturing the action under the best of conditions takes patience and persistance. If you're a perfectionist at heart, you may be in for a lot of frustration as you try to overthink the shot. But if you just become one with the "photographic zen" (see earlier posts) you'll soon begin to anticipate the action before it happens.

Communicating the action to your audience is how you get those attention getting shots. Because even though I'm all for that still shot of the player on the sidelines, it's the action shot that the players, families and friends really want to see. The shot that says "yeah I did good" or "that's my kid"; that's what brings the smile to the audience.
Well it's gettig late here so I'll leave you for tonight with a simple hint on shooting action shots.
HINT: If you study your subjects before you begin shooting, you'll be more equipped to anticipate where the action will be.
See you soon and keep shooting!
Posted by JKShutterbug at 7:01 PM