So have you ever set out for a specific adventure only to discover that the outcome was totally different than what you expected? This happened to me over the weekend when my wife and I

rode our motorcycles to one of our favorite parks to take some pictures of the spring blooms.

Well it turned out that we arrived a bit late for the early spring blooms and a bit early for the late spring blooms. But it was still a beautiful day so we continued our walk around the park. Even though the flowers weren't abundant, there were still some interesting things to shoot like ferns which under the subdued light, still made for a fun picture.

While turning up a few stones (so to speak) there was an abundance of what I would call 'micro-flora' that, with a macro lens still looked larger than life. I've alway enjoyed the micro world as I always find it amazing to discover the hidden detail that appears while doing my post processing.
As we followed the path to park exit something in the southern sky caught my wife's eye. I remember her saying that she at first thought it was just the suns rays being bent by her sunglasses (Maui Jims; every always looks better through Maui Jims). But as she lifted up her glasses it was still there. Of course I was still crawling along the ground looking for 'micro-flora', but I heard her call to me to look up in the sky. Low and behold was one of the most interesting sights that I've seen of late. It was a rainbow that was stretched horizontally across the sky. So we sat on a park bench and watch this phenomenon for at least 15mins, as it finally dissappeared from view. 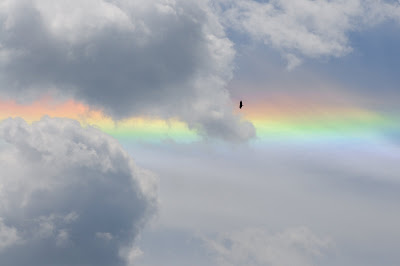 One of the things on my personal bucket list is to photograpy the Northern Lights, but on this day I felt as if I were seeing an Ohio version of the Northern Light. Perhaps the lesson I learned was to expect the unexpected and look up once in a while. And of course, always listen to my wife!!!
If you've had an interesting experience like this where the unexpected happened, shoot me a note. I'd love to hear about it.
Catch you later...
Posted by JKShutterbug at 8:11 PM