Over the years I've had the fortune to ride through much of the East & East Central US as well as a little bit in Canada, but this will be the longest solo route that I've ridden. Approx. 5000mi all-in-all. For months I've been "in training" riding rain or shine, day or night (of course those who know me understand that I do that anyway). The route looks something like this, although traffic, weather and the unknown could alter the route a bit. 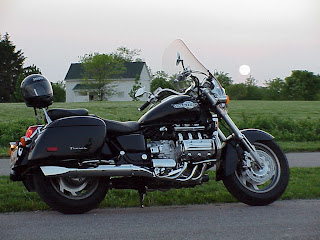 So in true biker form the question is "What cha ridin?"

I call her Black Beauty. She's a 1999 Honda Valkyrie Tourer. I've ridden over 47,000 miles on her, as the original owner, and I can't think of a bike that I'd rather have. I'm personally not into the rumble of the Harleys and I'm not a great fan of the V-Twin for long trips as the vibration fatigues me a bit. But I certainly respect all bikers and their bikes as Two Wheels are Too Coool.

The route is pretty straight, route 70 most of the way headed west. I'll drive through many great cities, Indy, St. Louis, KC, just to name a few, on route to a slight jog to Wichita, where I spent 12 years of my childhood. I'd like to stop by a restaurant called NuWay. 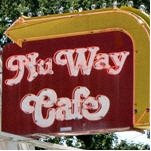 This was a childhood favorite of mine. Basically a NuWay is a ground burger, of sorts, with awesome seasoning. NuWay also makes its own root beer, which is to die for! After filling my belly with goodness, I'll head back to I-70, maybe catching a photo of a field of sunflowers (my wifes favorite). As I hit the Colorado line it won't be long before the mountains appear in the distance. As a child, heading to Colorado for summer vacation, I remember thinking that I was seeing clouds in the distance, then all of a sudden I would realize that I was really seeing mountains.

As I ride through Colorado, the camera will be calling my name as this is such a beautiful route. Next I hit Utah where I will hike Arches, Bryce and Zion (narrows). I'll meet up with my wife, youngest son & mother in-law in the Bryce area. After three days of hiking a 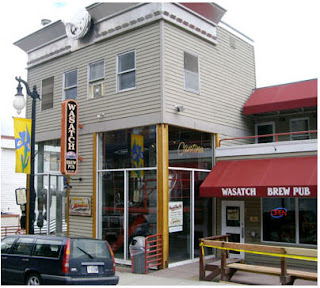 nd thousands of pictures, I'll head north to Ogden, UT, to visit with family and some of my wifes' highschool friends. At some point my wife will hop on the back of the bike for a day trip to Park City. Nothing like micro-brew in the mountains, not to mention a chocolate covered strawberry from the Rocky Mountain Chocolate Factory. Mmmm.

I'll separate from the family later in the week and make my way to Yellowstone, to take many more pictures. Next it's off to the Dakotas to see Mount Rushmore, Crazy Horse and Badlands. Finally it's time to head home.

With 7 days left before my departure, I pray for clear weather, clear roads and good health. If anyone has any tips for the road or stories from their trip along a similar route, chime in.

See you next time!

Posted by JKShutterbug at 10:37 AM