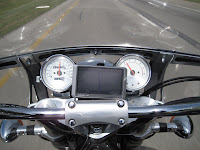 It's 12:30 CST and I'm calling it a day. I've logged 820 miles today. I still feel pretty good; just a slightly kinked neck but nothing my favorite massage therapest, Annissa, can't take care of upon my return (have mercy) :)

Today, in some ways, was one of the harder parts of the trip because the road is pretty much flat, and consists of farm land. The first major step was hitting the Ohio/Indiana boarder. At this point I really felt that I was on my way and not just o 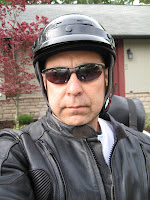 n the typical weekend ride. The weather was great. Cool in the morning, but warming into the 80's when I hit St. Louis. I could have bypassed St. Louis, but for some reason I wanted to pass by the arch, even though I've seen it many times before. Maybe not the smartest move since I hit rush hour and it took about 90mins for me to get through the core of the city. Regardless, I got saw the arch (sorry for the poor picture, it was hard to get a good shot at 75 mph in traffic. My next adventure was to find some barbeque for dinner. Well that didn't work either thanks to many road changes in KC that confused my GPS (by the way, when a 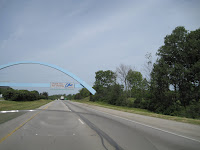 re the GPS manufacturers going to implement a "ghetto avoidance" feature?).
Finally I'm in Junction City, KS, which is the midpoint of my trip. I'm staying at the Econolodge, which by the way is the best hotel in the area??? Actually it's not bad for $44 + Tax. It appears to be clean and it has a bed, and that's where I'm headed now. 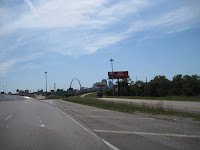